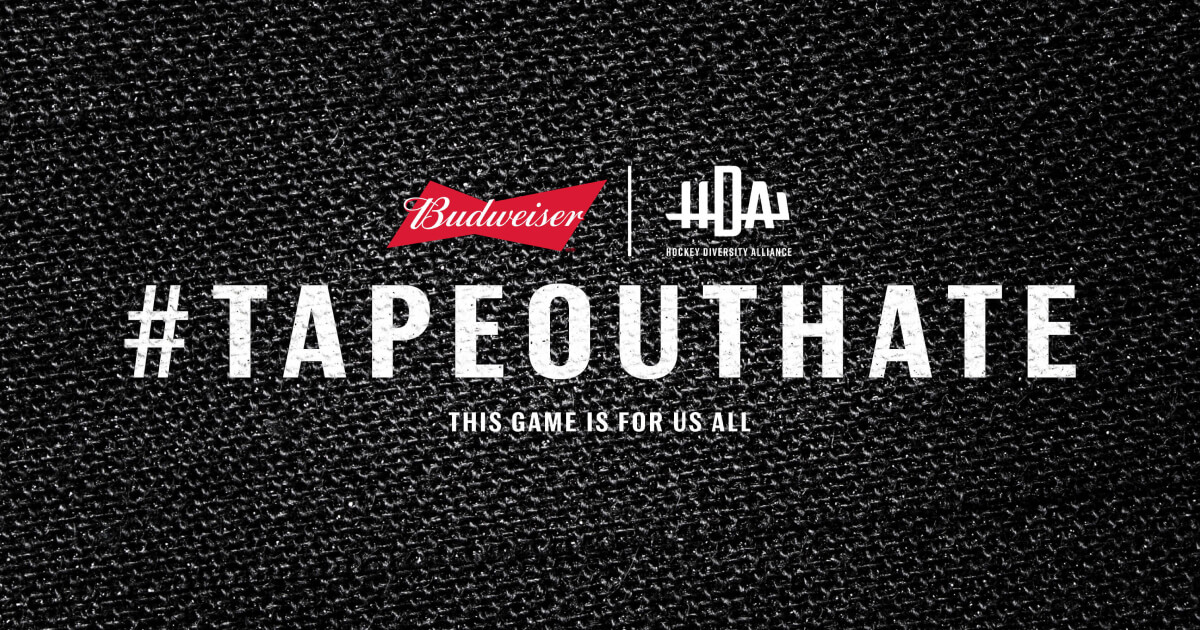 This official partnership launch champions the HDA’s mission to eradicate racism in hockey, with a specific and simple call to action to #TapeOutHate.

Canadians can join the movement by using the hashtag, sharing the campaign video or purchasing a roll of physical #TapeOutHate hockey tape, where $1 from each roll of tape directly supports the HDA.

Today, Budweiser Canada and the Hockey Diversity Alliance (HDA), announced an official partnership with the launch of #TapeOutHate; an impactful campaign in support of the HDA’s ongoing mission to eradicate racism in hockey – both on and off the ice – with a specific and simple call to action to #TapeOutHate.

The #TapeOutHate campaign was inspired by HDA members’ collective and personal experiences in dealing with race, and the role that it continues to play in hockey. Spotlighted in a powerful two-minute video, #TapeOutHate is meant to rally fans of the sport – and Canadians at-large – to stand in solidarity and join the movement that racism has no place in the game.

“Budweiser has a long history of supporting hockey, and as a brand that believes this game is for us all, we recognize the obligation we have to continue to learn and evolve with the game to make it better for generations to come,” said Mike D’Agostini, Senior Marketing Director, Budweiser Canada. “The goal of #TapeOutHate is to educate, raise awareness and spark meaningful conversations about intolerance in the sport, and encourage Canadians to collectively become allies in the evolution of hockey culture.”

To help drive visibility for the movement and encourage action beyond social conversation, Budweiser and the HDA have designed a physical roll of hockey tape featuring words of support and solidarity from fans, and players. One dollar from every roll of #TapeOutHate hockey tape will go towards the HDA and its mission to eradicate racism in hockey. Hockey fans can purchase the tape starting January 8, 2022, at shopbeergear.ca and at Canadian Tire stores across the country starting January 22, 2022.

“I was ten years old when an opposing team member’s parent called me a racial slur on-ice for the first time,” said Akim Aliu, founding HDA member and NHL Alumni. “This month marks 64 years since the first Black professional hockey player – Willie O’Ree – made his NHL debut, and yet, acts of racism towards Black players remain prevalent at all levels of the sport. By showcasing a snippet of the real, lived experiences of racism the BIPOC community faces when trying to play a game that we love, we hope to inspire a groundswell of change, because racism has no place in hockey.” 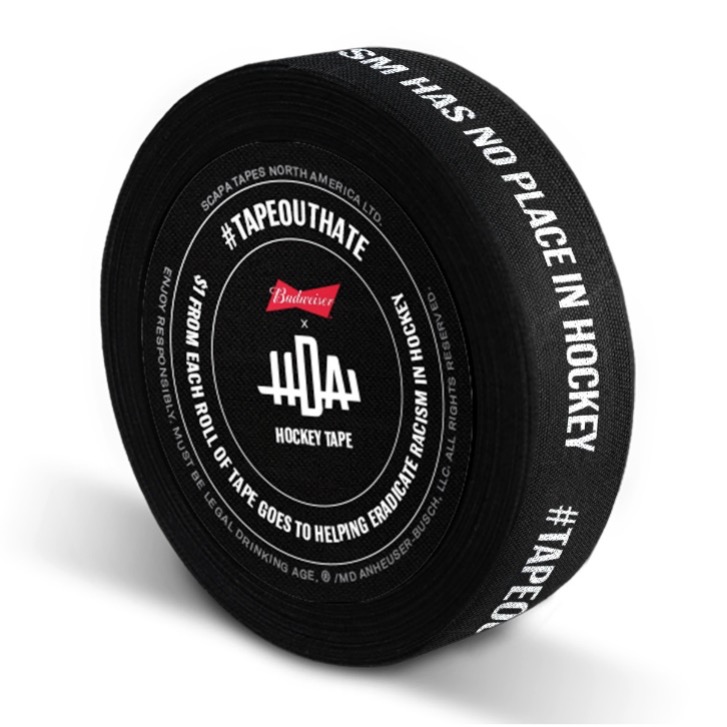 #TapeOutHate hockey tape created by Budweiser Canada and the Hockey Diversity Alliance (HDA) is now available for purchase at shopbeergear.ca

“We’re only so many within this game, so we need allies to speak up for us,” said current NHL player Anthony Duclair. “Whether it’s other players, brands or sport fans of any kind, we need the support of others to help make this a movement, so silence is not an option. If you get more diversity in hockey, it’s only going to make the game better.”

It was the stark reality of racial inequality in society, brought to light with the murder of George Floyd in May 2020, that led to the formation of the HDA. Since its formation in 2020, the HDA has worked tirelessly to shed light on the harsh reality of discrimination and racial inequalities that exist in hockey culture. Budweiser Canada recognized the importance of not shying away from long overdue conversations and an obligation to learn more about becoming an ally for the BIPOC community.

“As the beer brand that brings friends together for game time, we recognize – now more than ever – the role our platform can play in driving purposeful change,” continued D’Agostini. “We have a long way to go and a lot more to learn, but by partnering with the HDA, we’re furthering our steadfast commitment to championing diversity in a sport we love.”

In addition to the formal HDA sponsorship and the #TapeOutHate hockey tape for purchase, Budweiser Canada is committing to ongoing amplification of the HDA’s mission via the #TapeOutHate campaign in several ways, including:

For more information, visit Budweiser.ca/TapeOutHate. Hockey fans can purchase the tape starting January 8, 2022, at shopbeergear.ca and at Canadian Tire stores across the country starting January 22, 2022.

Budweiser – the King of Beers – has been brewed since 1876 under the highest quality standards. Brewed in Canada for more than 30 years, Budweiser uses only the finest ingredients without any artificial ingredients, additives or preservatives. Budweiser is distinguished by its clean, crisp, distinctive flavour, the result of a unique beechwood aging process.

The Hockey Diversity Alliance (HDA) was formed by NHL players of colour who saw an immediate need to organize and create a platform to end racism and intolerance in hockey. Both inspired and shocked by actions across North America in the wake of the death of George Floyd, and drawing on their own experience, these players quickly determined they could organize and draw attention and resources to help resolve the racism and intolerance they have faced throughout their lives and careers.

Committed to inspiring a new and diverse generation of hockey players and fans, the HDA works to improve accessibility at community levels while educating and encouraging accountability from leagues and leaders through anti-racism and unconscious bias education.