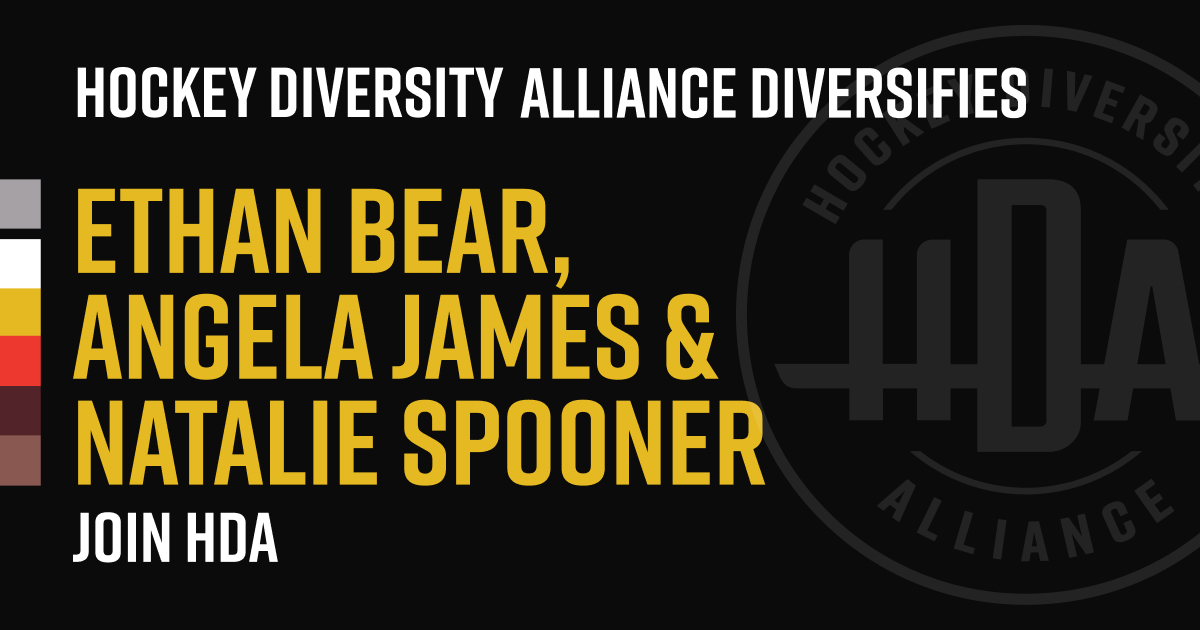 The Hockey Diversity Alliance (HDA) has added two female hockey legends and an Indigenous NHL player to its leadership, expanding the effort to stop racism and intolerance on the ice and in the wider community. On the heels of its one-year anniversary, the advocacy group welcomes new members Angela James, Ethan Bear and Natalie Spooner.

"Racism remains a dangerous presence in the US and Canada. It happens at the local community rink and every day on social media,” says Akim Aliu, founding member of the HDA. “By diversifying the voices on our board, we will gain a new understanding of the challenges we face across our sport and also develop new, meaningful solutions.”

Widely considered the first superstar of national women’s hockey, Angela James was the first Black woman and openly gay player to be inducted into the IIHF Hockey Hall of Fame. She is a four-time world hockey champion and a passionate advocate for girls’ team sports.

“Growing up as a mixed-race girl on a male hockey team, I had to overcome name-calling and alienation because of my race and gender,” James says. “As someone who is now a role model, I consider it my responsibility to make sure that isn’t happening for racialized girls coming into hockey now. Joining the HDA gives me a platform to do that.”

Drafted to the Edmonton Oilers in 2015, Carolina Hurricanes defenceman Ethan Bear is an inspiration for Indigenous youth. Each summer, he hosts a hockey camp on the Ochapowace First Nation in southern Saskatchewan, where he was raised. In addition, in July 2020, he became the first player to wear a jersey with his name written in Cree syllabics during an exhibition game. His success in hockey hasn’t come without challenges. Following the Spring 2021 playoffs, Bear endured racist comments on social media, which he called out in an effort to raise awareness.

“It is so important to me to stand up to racism - for the Indigenous community and all people of colour,” Bear says. “There is no place for this kind of hate in our community. Joining the HDA will help me use my voice to make sure the next generation won’t have to go through what we have.”

Natalie Spooner, a member of the Canadian National Team program since 2007, also joins the HDA. The 30-year-old Olympian is an ambassador for Fast and Female and invests in developing girls’ hockey skills at the High Performance Hockey Academy for girls.

“When I was 11 years old, I met Jennifer Botterill and saw her gold medal in real life. In that single moment, I felt like my hockey dreams could be realized,” Spooner says. “Now, I’m a role model for young girls and I want to inspire them and give them that same belief in themselves.”

The HDA has made its mark curbing racism in hockey over the last year with the following actions:

The Hockey Diversity Alliance (HDA) was formed by NHL players of colour who saw an immediate need to organize and create a platform to end racism and intolerance in hockey. Both inspired and shocked by actions across North America in the wake of the death of George Floyd, and drawing on their own experience, these players quickly determined they could organize and draw attention and resources to help resolve the racism and intolerance they have faced throughout their lives and careers.

Committed to inspiring a new and diverse generation of hockey players and fans, the HDA works to improve accessibility at community levels while educating and encouraging accountability from leagues and leaders through anti-racism and unconscious bias education.